Winter is here. Notwithstanding the fact that since the passing of the winter solstice in late December, and the indiscriminate increasing length of daylight, the days in the northern hemisphere remain short with nights that stay deep and long. The chilly irony of winter is that while the months of January, February, and March are mind-numbingly cold at night, many spectacular gems, gorgeous celestial events, and unique colorful objects are beckoning you to come out and view. Darkness arrives earlier, celestial objects are visible sooner, lower humidity in cold air lend to sparkling, clear, inky black dark sky. Stargazing is a year round activity; so bundle up, step outside, and look up. Experience the stillness of a winter night and awe in these January celestial events.

This is a big deal! ZTF is a long period comet visible all month, speeding towards the Sun near the celestial north pole in the night sky. A long period comet takes over 200 years or more to complete an orbit of the sun. Comet C/2022 E3 ZTF has a period of 50,000 years. The Neanderthals dominated the Earth the last time Comet E3 passed by. Comet E3 was discovered in March of 2022, at the Zwicky Transient Facility (ZTF) using the 1.2 meter telescope at Mount Palomar in southern California. Analysis told astronomers the comet will be closest to the Sun (perihelion) on January 12th, and closest to the Earth (perigee) on the 1st and 2nd of February at a safe distance of more than 26 million miles. The best time for you to easily find and see the comet with your naked eye is between January 27th and 28th. Before and after these dates, you’ll need binoculars to see it and I recommend using them.

Pay day will be February 1st and 2nd when the comet is nearest to the Earth. All fingers are crossed that the comet will reach a magnitude of 5.4 and be clearly visible to the naked eye. Sad to say, unlike January, in early February, the comet is more difficult to find. Yet, to paraphrase one comet hunter, comets are like cats, they have tails and do exactly what they want. Since it is so unpredictable, that’s all the more reason to find Comet C/2022 E3 ZFT now. 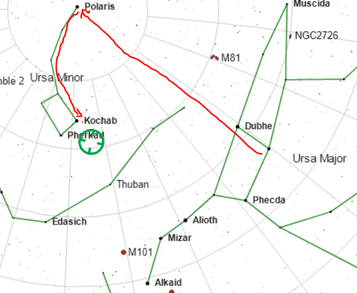 The map shows the night sky looking north around 6pm MST on January 27th. At 40 degrees north, we see Ursa Major low in the north-northeastern section of the sky. Once you find Ursa Major, locate the star Merak, and then slowly draw a line connecting it to a close, very bright star above it, Dubhe. Both stars are the forward side of the dipper’s “cup” of the Big Dipper.

Now it is time to grab your binoculars. From this midpoint begin to slowly move your view downward towards the northern horizon scanning for Comet E3. You’re looking for faint smudge. It will be dim and diffused. Search for a faint chalky finger print on the night sky. After the 28th, E3 swiftly progresses north towards Polaris, getting brighter, and growing a longer tail. Yet, it is more difficult to locate, however. 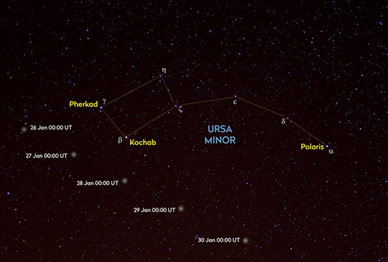 Saturn’s lengthy sojourn across our night sky begins to draw to a close throughout January. Descending quickly in the southwest along the ecliptic, Saturn will meet Venus, separated by 21 degrees, and the one-day-old Moon, separated by 8 degrees. Get out early after sunset for this one. My tip is to view the event from a location with an unobstructed clear view to the southwestern horizon and start observing the event about 20 minutes after sunset to see the trio. The Moon will be faint, a quite thin crescent and the first to fall from view over the southwestern horizon. If you have binoculars use them. Saturn’s rings are spectacular at sunset.

Mars Rides the Bull to Pleiades: The entire month of January

Red and stunning, Mars at the beginning of the month arches truly high in the sky. Nearly 70 degrees altitude. On January 12th, it completes its retrograde motion and grinds to a halt in the sky. The next night, Mar’s resumes an eastward trek reaching 10 degrees just east of the Pleiades (M45). At the same time, just to the left of Mars, is the Red Giant star, Aldebaran. With a distinct red color, it resides in the constellation Taurus, the Bull. In fact, Aldebaran is considered the angry red left eye of the Bull. It is a sight to see these two red objects in the night sky near one another, one twinkling and the other not so much, and then the bluish hue smudge of the Pleiades. Lastly, on the 30th of the month, watch as Mars just grazes the waxing gibbous Moon. If you live at 37 degrees northern latitude or lower, you’ll see another occultation of Mars by the Moon. That’s twice an occultation occurring in less than 30 days!