Girls of the Gore 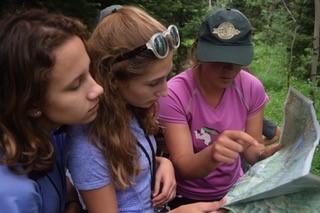 The Summer of 2017 was a summer of firsts - for me personally and for Keystone Science School. For me, it was my first summer living and working in Colorado. For KSS, it was the first summer there would be an all-girls wilderness trip: Girls of the Gore.

Both my co-leader, Sara, and I were excited to be leading the first ever all girls trip at KSS. Sara was one of the wilderness leaders who proposed the idea at the end of the previous summer, so she was excited to see the idea come to life. I have worked with all-girl populations throughout my career and always found it super rewarding. I was looking forward to the new experience of an all-girls backcountry trip.

We were off to a rainy start as we loaded up our backpacks in the van and left KSS and civilization behind. We drove to Cataract Lake to camp for the night; we would head into the backcountry the following morning. Upon arrival at camp, we taught the girls how to set up their tents and went over the basics of backcountry cooking. It was a summer of first for our girls as well, as most of them had not been on a wilderness trip before; these outdoor skills were new to them. After dinner, we played a “Women in the Outdoors” trivia game to start the conversation about barriers women face in the outdoor industry. The girls enjoyed the competition and surprised by some of the statistics. Did you know that Outside Magazine’s photos only feature women 11% of the time? 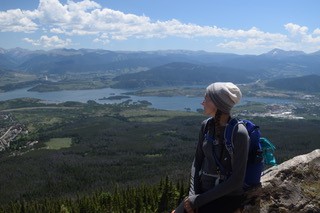 The next morning, we woke early to pack up camp and hit the trail. We divided food and group gear among all of us, loaded our now bulging backpacks into the van, and drove to the Surprise Lake trailhead. We hoisted our packs onto our backs and took our first steps onto the Gore Range trail.

Our journey took us through about 13 miles of wilderness over the course of our first week together. The rugged terrain challenged us as we backpacked up and down mountains, bushwhacked to find the trail, followed herd paths along ridges, crossed streams, climbed over more dead logs than we could count, and trudged through the rain.  The girls were troopers; some of the girls were carrying packs that they could have comfortably fit themselves in, but Sara and I never heard any complaints.

We were off to a rainy start as we loaded up our backpacks in the van and left KSS and civilization behind. We drove to Cataract Lake to camp for the night; we would head into the backcountry the following morning. Upon arrival at camp, we taught the girls how to set up their tents and went over the basics of backcountry cooking. It was a summer of first for our girls as well, as most of them had not been on a wilderness trip before; these outdoor skills were new to them. After dinner, we played a “Women in the Outdoors” trivia gam

We worked together to figure out where we were on the trail and where we were heading next. Each of the girls had the opportunity to be the “Leader of the Day” as we hiked. They set our pace, stopped for water appreciation moments (WAMs), pack off breaks, and made sure that our group was taking care of each other.

We camped near beautiful lakes, among groves of Aspens, and under Pine trees that reached high into the sky. We had amazing lunchtime views and always enjoyed our meals together. It was always full of laughs.

The girls practiced, and eventually mastered, the wilderness skills that Sara and I taught them. They set up the “kitchen” and dug sump holes for washing dishes. They dug group latrines, filtered their own water, hung our food and “smellables” in bear bags, learned how to cook over pocket rockets and double burner stoves, and practiced Leave No Trace principles. After a few days of practice, the girls took immediate initiative to get our campsite “set up” for the evening without us asking them to do so.  It was great to see the progression as the girls not only became more comfortable with these skills but also became more comfortable living outdoors and with each other. You know that you are comfortable with a group of people in the backcountry when you can share that your poop reminded you of a specific Harry Potter character!

We came out of the backcountry for the weekend to do some trail restoration at Rock Creek trailhead with Friends of the Dillon Ranger District. We closed one of the “roads” leading to a campsite by digging up the packed down soil and covering it with duff - dark, rich, organic soil and pine needles. We transplanted baby pine trees, dug holes for stumps to act as barriers, laid fallen logs across the “road”, and left it for nature to reclaim.

The girls also chose the location of their challenge hike that weekend. Sara and I gave the girls four different options, had them discuss each of the routes, and come to a collective decision. They compared the physicality of the routes, how long it would take us to hike based on our average pace, how early we would have to wake up in the morning, and how the group was feeling about the hike - both physically and mentally. The girls ended up choosing to hike Buffalo, one of the iconic Summit County Mountains in the Gore Range. We woke up before the sun to hit the trail. It steeply ascended switchbacks and once we emerged out of tree line, we rock scrambled until we reached the last, steep, half mile of the trail. It was nothing but smiles on the summit. (However, the smiles we partially due to the Oreos that Sara and I had hidden in our pack as a surprise summit snack.)

After our challenge hike, we headed back into the backcountry for another couple of days. We hiked down steep and rocky precipices, and crossed more streams. Before heading down to Buena Vista, we hiked Mayflower Gulch and spent some time playing mafia and relaxing in the sunshine.

Throughout our trip, we had many great discussions surrounding leadership, gender barriers, and women in the outdoors. We read an article about a female scientist studying climate change in Alaska, who experienced numerous fiascos while tried to pee without taking off her bibs (a garment similar to a snowsuit) because most bibs are designed for men and not women. We discussed gender representation and reasons why KSS offered an all-girls trip. We discussed society’s expectations of girls vs. the reality that we all fall “outside the box”. We shared personal experiences of feeling discriminated against based on our gender. We learned about awesome, influential women such as Junko Tabei, the first women to summit Mt. Everest, or Mae Jemison, the first African-American woman in space.

My personal favorite part of the trip (besides the fact that we all read multiple books) was how we empowered and encouraged each other to be ourselves. One of the KSS summer camp traditions is creating bead necklaces. There are different beads that represent different accomplishments throughout the camp week such as being respectful and helping your team, crushing your challenge hike, participating in the talent show, etc. On our Girls of the Gore trip, we still had bead necklaces, but with a new twist. At the beginning of our trip, each of us shared a positive quality that we individually brought to our group. Then, each of us chose a bead to represent that positive quality - outspokenness, honesty, loyalty, listening, optimism, hard work, flexibility, and caring. We each had a necklace full of these positive qualities that we wore throughout our trip, and reminded us how strong our group is together. At the end of the trip, we made a list of qualities that we associated with positive/genuine relationships. We then chose four that best represented our group, and chose four more beads to represent those qualities - humor, flexibility, support, and the ability to genuinely be yourself.

We concluded our trip whitewater rafting the Arkansas River in Browns Canyon, eating burgers, and watching the new Beauty and the Beast movie. After singing a variety of Disney songs throughout our trip - whether it was hiking or while hanging our bear bags - it seemed only appropriate way to conclude our weeks together.

If you or someone you know is a teen [or 7-12th grader] who likes to adventure outside, make new friends, and might like a trip such as this, tell them about the Keystone Science School Summer Camps.  Find information about registering for our Keystone Mountain Adventures and Keystone Voyageurs programs here.

Join us for the Summer of Exploration Girls of the Gore this coming summer 2018!